We have talked about the green quilt and wanted Mom to tell it's story. When she started making it Wizard was with her. He loved to help her. He sat on each piece as she tried to cut it out or sew it. He really loved the fabrics in this quilt. It has jungle animals on it. While she was quilting it, she kept having to move him cause you cant free motion quilt with 15 pounds of fur laying on it!

When the quilt was finished, she laid it on the bed to take pictures of it. He laid in the middle of it. Dad had to hold him for her to get a picture. She did get pictures of him on it, but it was before her digital days and she cant find the pictures! 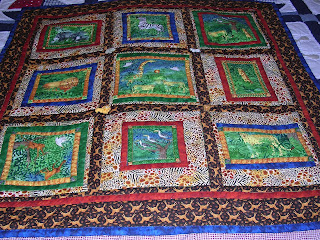 Then she turned it over to take a picture of the back, again he was on it. After she took the picture, he laid down and went to sleep. When she removed it he followed her and laid on it folded up. Mom got the message very quickly that he wanted to lay on it. She put it back on the bed, top up. He pawed at it till ha had it turned over, back up. It has animal buttons on the front and he did not like those! It has been on the foot Mom's bed ever since. 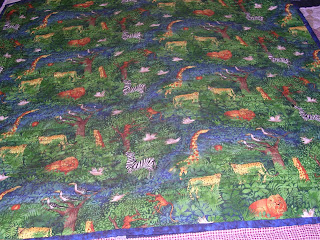 When Angel came to to live at the house, Wizard must have told her it was OK to sleep on the bed if she was on the quilt. She sleeps there every night but will not sleep any where but on the quilt. She in turn has taught Kirby the quilt/bed rule! 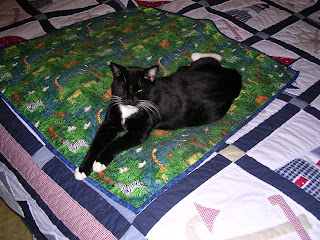 Interesting! The last photo is full of comfiness!

Thank you for sharing that story! It's interesting how the new cats learn the family customs from the ones who went before. Also cute that Wizard preferred the back of your quilt rather than the front.

That is a lovely quilt and a sweet story. Happy lounging :)

Gandalf and Grayson sleep on a quilt every night - mine! They also have a fleece blanket at the foot of the bed that they lay on - half on/half off!

That quilt is beautiful. We can see why you all would want to sleep on it. If we had that quilt, we'd sleep on it too!

Beautiful quilt! Your mom is very talented! Wizard sounds a lot like how Cal was with any projects that mom would try to do. He always tried to help by laying on them :)

That was such a sweet story - it brought a tear to my eye because I could just picture it so well! I like that it is a tradition for the quilt to be the spot for one cat at a time. We don't have a quilt here so none of the cats get to sleep on one, and they are all jealous of such a nice, comfy spot!

What a sweet story and a beautiful quilt.

What a very pretty quilt. We enjoyed the story too.

What a lovely story! That is really a very beautiful quilt! Your Mom is talented!

Me again! My mom is soooo slow! Sorry this took so long! We have given you an award. Hope it is ok and that you can take it!

Oh, and I have gotted you an award. Come check, okay?

Your mom quilts? WOW! A friend of Tommy's just started lessons at a place here in Dallas. Tommy says her friend has to make us a blanket! I like YOURS,so we need to have ours NOW!

That is a great story about the green quilt, and wonderful memories of Wizard. Maybe your mom will find the pictures one day and be able to scan them?
--JB

That's a really gorgeous quilt! My mum has a fuzzy blue blanket for us cats to sleep on. It's very snuggly.