Wendy has done it again!  She featured Kirby on Wendy's LOL Spot.  If you are not familiar with Wendy, go check her out!  SHe always has something funny to say about us kitties! 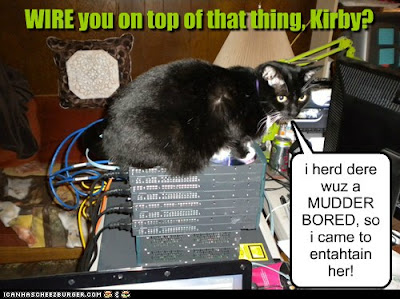 I think Kirby totally misunderstood -- the 'motherboard' is the PURRimary circuit board in any PC!
That is rather boring, though.  Ho hum!
Posted by Angel, Kirby and Max at 8:38 AM 12 comments:

Wednesday with Angel and Clifford 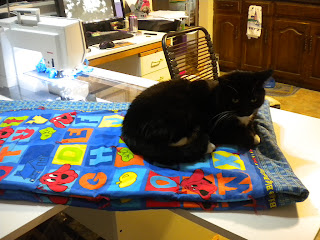 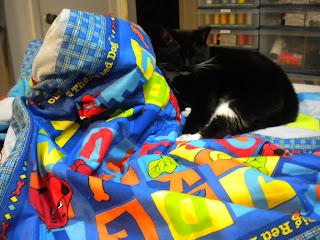 Mom's friend made this quilt fir her Church's charity.  Mom finished the quilting and binding for her.  Some little one will love it!
Posted by Angel, Kirby and Max at 9:51 PM 16 comments:

IT cat is on the job making sure your network is working correctly. 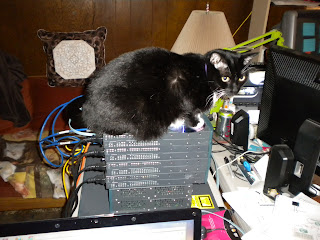 This is Dad's homework practice lab of  network switches and Kirby wanted to snoopervise his study!
Posted by Angel, Kirby and Max at 10:09 AM 14 comments:

we have a couple of intruders that come to our backyard. We don't mind him too much, we feel sorry for the two. We do not mind at all that mom feeds the intruders.they have been in backyard for a couple years through the heat and the cold. Mom made sure they had a good warm place in the  winter and when it is raining she puts their food bowls inside the shelter. We think they're a mated pair because of the way they act together. We know that they both had been fixed because we haven't had any kittens show up on our doorstep. Mom would sure like to bring Ms. Gray Kitty in but she doesn't know what will happen to Mr. Black. Ms. Gray has gotten so used to mom and she can pick her up and hug her and love on her. Mr. Black is still very shy, he doesn't get within 5 feet of mom. And when he doesn't show up Ms. Gray to find him,and bring him up for dinner.  She'll lay down on her back roll up on her tummy and let him have the first go with food bowl.Mr. Black is a scrapper. He's had a few fights has some pretty horrific looking scars but he healed nicely and has a never had any infections in his injuries . Now, what you've all been waiting for, the pictures. 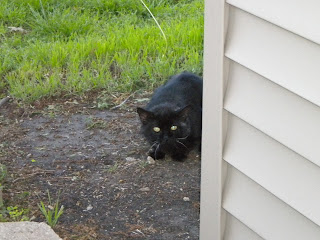 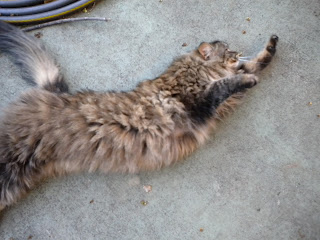 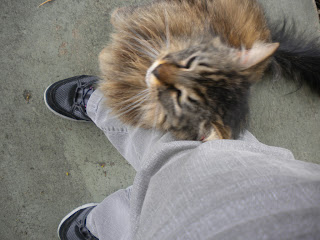 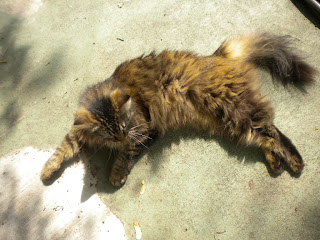 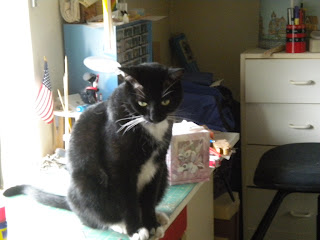 We can't believe it's been two weeks since mom posted last! We don't know what's wrong with our mommy but she just plain lazy when it comes to blogging. Actually she hasn't been doing much sewing on quilts either. She has made a lot of toys but as you can see she hasn't posted any pictures of those either.

We're all okay. We did not have any bad storms the day of the tornadoes, just some rain in teeny tiny hail. Mom stated a friends house all afternoon because her daughter with was in the direct path of one of the tornadoes. Hopefully mom get back to blogging soon because we do miss our friends.

Mom here: last month when I picked up medications at the drugstore, I didn't open the bottle for two nights. When I did I notice that the aluminum safety seal was missing. I didn't think too much about it because sometimes my husband opens my bottles for me. About mid month I became very concerned because I was missing half the bottle of pills. Of course the drugstore wouldn't believe that they gave me an already opened a bottle and would do anything to correct the situation, so I had to take drugs every other day for the last two and half weeks. I'm back to normal dosages now but I think that time frame is caught up with me and I've been really down and and I have no energy and no motivation. Hopefully by the end of the month things look sorted itself out and I'll be back to my usual.

I have been playing with Dragon speech recognition software. If my comments on your blogs do not read very clearly it's because I'm still trying to learn to speak clearly. I got this software because I want to read the book my father wrote into the computer so that we can put it on an e-book. I do not have his original files because they were on 3 1/4 inch floppy disks. And I have no idea where they are. So far I'm having a lot of fun with this Dragon software.
Posted by Angel, Kirby and Max at 7:28 PM 16 comments:

Mom is working in her sewing room.  She is rolling her fabric in to cards so they will be more organized! She is using acid free card stock from the comic book store.  They use them to separate comic books and go keep them from sagging when places in plastic bags.   When Mom folded a length of fabric in half (to 11 inches) they roll the fabric very flat .  She has combined 4 drawers into 3! Maybe tomorrow she will get a picture of the roll!

While she had the drawers out of the cabinet. Kirby had to investigate! 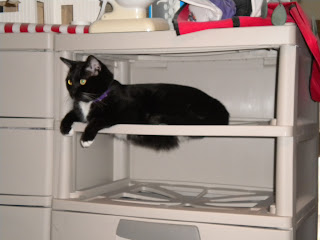 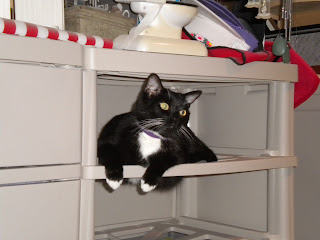 Mom said to ignore the tiny toilet on top of the cabinet.  It is a coin bank!
Posted by Angel, Kirby and Max at 12:14 AM 24 comments: