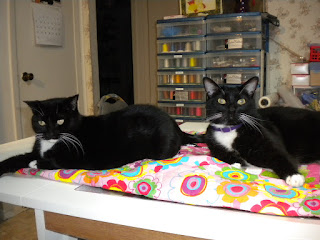 Sorry I have not posted for a couple of days. Mom and Dad tried giving me fluids on their own last night and they were not so good at it.

I told you I would introduce Angel so here goes.

One cold night in February, Dad came in the front rather than the back door.. He called Mom out to see what he found. Across the street huddled against the step of a Neighbors house was a tiny black and white kitten. Mom could not stand to see her out side in 30 degree weather so she started trying to coax her in. It took an hour to get her across the street because every time she started to follow Mom, another car would come. then she would get scared and run back to the step.

Finally Mon got her to the back yard and was getting her a box with a warm towel and food. When Mom opened the food again, in she came! She would run in and then back out. I came in the room to see what all the fuss was about and she hissed and growled at me. I turned my back and walked away. She followed me!

Mom was concerned that she might have something that might make me sick, so she set her up in the garage. The next morning Mom took her to see DR. C. he did tests and deemed her healthy. So mom let her loose in the house with me.

I ignored her and she stopped hissing at me. That weekend Mom could not find her. She searched all of my normal hid outs but she was not there. Finally Mom found her on a shelf in the quilting room. When Mom picked her up, her bottom was wet. Mom thought she had had an accident and did not think too much about it. Then they started looking her over closely. She still did not like to be held or touched, especially on the head, but they did it any way.

She had a bad sore on her leg that had ruptured and was infected. Back to the vet she went. No one could determine if another animal had bitten her or if a human had hurt her.

Two weeks later she went into heat. She drove me and Mom crazy! Dr. C got that fixed as soon as he could get her in.

It has been seven months now and we are best friends. We play , eat out of the same bowl and sleep together. She still does not like Mom or Dad to reach for her head when they pet her. They think some one was mean to her. No one ever appeared to be looking for her so she is now my sis.