Wizard went to the Bridge 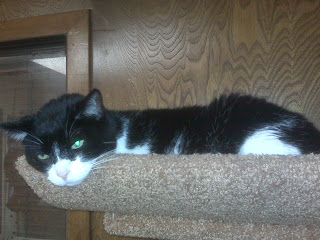 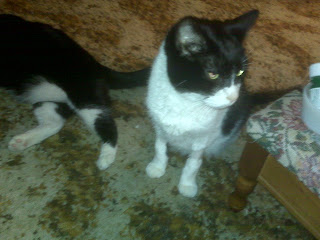 I have not been honest on this blog. I wanted to keep it positive and upbeat and fun! Wizard was going down hill quickly. This past weekend he started telling us it was time. He did all his favorite things.. he sat in his little yellow chair and looked out the window. He made it to the top of the tower for a nap. he slept in the current box in the living room. He laid in our laps, a lot. He cuddled with Angel most of the time on the couch. He sat and slept on the sewing table while I quilted. He went out in the garage all the way to the big door and came back. He had to lay down three times in that journey.

He did not eat but a lick or two at a time. He would lay on in front of the water dish and not drink but a lap or two. He was not just having OLB's be we two weak to make to the box and when he did, he would do his business and then lay down in the box. He would not sleep on the bed where he had slept almost every night for 6 years.

He could not find the bridge alone so we had to help him. I wrapped him in a towel and cradled him. Dad picked up Angel and they touched noses to say good by.

We know he is in a better place. We are still very angry that a pet food company caused his early demise. He was only 8 and should have lived another 10 years.

He was a Fierce Fighter if there ever was one! He was a true and constant companion.

He was loved and will be misssed.

Mom was making a table quilt today and I got up on the table to help, just like I use to. Angel wanted to be with me, but she is afraid to get on the table. She did get in the chair which was close to me. I have been having OLB experienced (out of Litter Box) Tonight was the fourth. At lease I go on a rug that can be washed and once in a box Mom had brought in for Angel to play in. Now I have gone off to the Library, away from the family. I know it worries Mon, but I like to sleep in the play tube, it's cozy!
Mom looked out for White Kitty, but did not see it. hopefully it remembered where home is! It was damp today and that made it feel cold. Mom Said it was in the fifties what ever that means.

I like the cool! I can snuggle with my big bro, which I did most of the day. and then I ran like my butt was on fire and slid on the rug in front of the water bowl. It was 3 kinds of fun!
Angel.
Posted by Angel, Kirby and Max at 12:20 AM 1 comment: 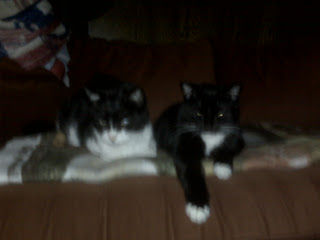 Mom told White Kitty he needed to find home. It got cold last night, down to 33 degrees. She told him that she would not worry about him but Dad told him she really would! He was not in the yard this morning when she left.

We are glad we are inside cats, especially when it is cold! We even snuggled! 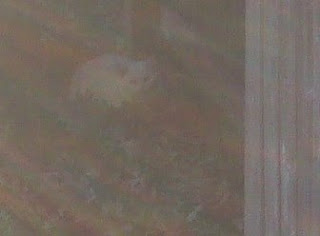 White kitty has been hanging around outside. He was asleep on the porch on Tuesday and in the leaves on Wednesday. Mom can not get very close or it runs. She took this picture with her phone. We think this White Kitty is why Angel is so restless in the evenings. She wants some one to play with. Mom thins White Kitty lives i the neighborhood and just likes to be outside. She hopes Animal Control does not pick it up!
Posted by Angel, Kirby and Max at 3:33 PM 1 comment: 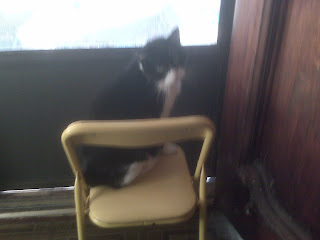 Posted by Angel, Kirby and Max at 2:39 PM No comments:

We went visiting oug blog frineds to say HI. We need to do that more often. It's hard with Mom at work all day and off sewing or doing Girl Socuts in teh evenings! We will try to get by to see more of you tomorrow.
Posted by Angel, Kirby and Max at 12:51 PM 1 comment: 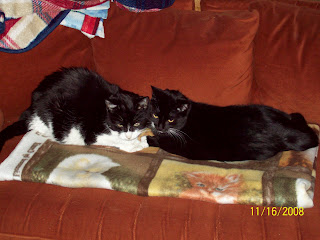 It got cold here today. I was glad to have my clean blanket to snuggle in. Mom brought home a lot of boxes. When she emptied the biggest one she had planned to reuse it. But It fell off the table and landed on it's side. I claimed it as my new favorite place to lay! Mom said it was OK, that if I wanted it I could have it!

Last night, Angel went all hyper on me. I was setting in the floor, minding my own business, and she started running in circles around me. She kept getting closer and closer. Then she Jumped over me! And not just once! Several times. I finally went back to the couch where she could not pester me. Wizard.

I was not trying to be a pest. I just do not understand why you don't plan any more! You have been feeling better and eating more, I thought you might feel like playing. Angel
Posted by Angel, Kirby and Max at 8:18 PM No comments:

I scared Angel Sunday. I was sitting in the door of my room when she ran down the hall chasing Mom. She did not see me till she passed then I spoke to her. She jumped straight up, spun around and bowed up in the middle. Mom and I laughed so hard!

It is raining here. Started last night. It rained hard and was flashy and boomed a lot! Loud, a lot. Angel was freaking out! And then the lights went out! it was so cool sitting in the dark and watching her slink around. Mom ans dad had lights they could carry around and fixed my dinner and went to bed! Before Dad came to bed, the lights came back on.

Did not scare me! I thought you was some one else! And I did not freak out, much. It was really loud booms and an hour in the dark was weird - ok freaky. I did not want to tell Wizard that I woke Dad up at 5 when it started again! I just wanted to ask him what the noise and lights were.
Mom said i was a 'poor baby' and Dad told me it was ok and to go back to sleep!

Mom and Dad found gravy in a bottle at PetSmart. They got a bottle to see if I would eat more I like it. it is chicken flavored! I sat in a chair by Mon while she played on the 'puter. Then I took a nap with her. I am trying to get better and be a part of the family! Wizard

My eyes are better. I still don't like being caught and treated so rough! Angel

Angel, We do not treat you rough. We cuddle and love you while doctoring your eyes. I know you do not like being forces to swallow the medicine, but you want to get better!
Posted by Angel, Kirby and Max at 5:17 PM No comments:

My eyes have been watery and yucky for a couple of days. Mom tool me to see Dr. C. I hated the PTU! especially when we were outside and the wind was blowing! I reminded Mom how loud my voice could be. When we got to the office, i quited down some and when Mom let me out, I tries to hide under the chair! But the guy found me. I got an infection in my eyes. I got a shot! I did not like that at all not the junk they put in my eyes. Mom and Dad have to put it in my eyes three times a day. That is going to be a trick! I don't let them pick me up three times a day as it is. It will be a game of chase every time! He also gave me some stuff that they have to make me eat! Ha! that ain't happening easily either! Mon told Dr C. that Wizard was not eating. She told him and he nearly cried with her. When she said that he would eat any thing liquid, Dr C told her to feed him broth! it looks gross! Angel


Hey! that is good stuff. Broth is water that taste like Chicken or beef! I 'ate' a whole quarter cup the first time. Then they mixed it with my other food and I ate more! Mom was glad to see me at lease try. Since she was happy, I slept on the bed with them most of the night. Wizard.
Posted by Angel, Kirby and Max at 3:45 PM 2 comments:

Dad came home on Saturday! Angel was a little scared of him at first. Dad is worried about me. I have lost so much weight that I am skin and bones. His and Mom's eyes leaked a lot today. Dad cold not sleep last night and sat in the living room. I went and talked to him. He fixed me another dish of food and I ate a little. I eat a few bites at a time. Mom has sat me in front of the food bowls several times today. I eat a little every time. But I'm just not hungry. I went out into the garage this evening for about 5 minutes. Now I am setting with Mom again. Earlier today I sat with her for an hour and let her comb and pet me. It felt good! I'm tires and sad. I have started sleeping in a room that I never went in much. Mom is upset that I will not sleep on the bed any more.


I was a little scared when Dad first came home but I, too, went in the living room and visited after Mom had gone to bed. I even got in his lap, but got right back down! I did not stay as long as I do in Mom's, which is about a minute! Angel.
Posted by Angel, Kirby and Max at 6:51 PM 2 comments: