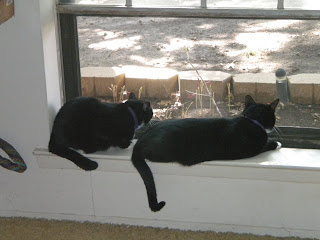 Mom did let us get Pirate names, even if we did not get to dress up!

She used two different name generators. The first was What's my Pirate Name that she found on Truffle's blog and the second was Pirate Name Generator found on Mr Hendrix's page!

Now for the boys:

Mac tested positive for FeCoV (FIP) ANTIBODY. The bottom of the test states ‘A positive titer is consistent with exposure to any form if Feline Corona Virus but does not confirm the presence of FIP nor does it indicate a healthy cat will develop FIP. Approximately one-third of cats with a positive titer shed Corona Virus.’ Mac is 11 years old and has lost 2 pounds in the past two months. He has gone through periods of not eating and losing for several years when he was at my mothers, especially in stress times (losing my Dad and then several years later my Mom). When he came to live with us, he was under weight and not eating, but turned around and gained up to 12 pounds. He is a tall cat and could carry 12 pounds well. He is skin and bones. Yes, we do have him confined now. We are giving him an antibiotic and steroid. He is eating every thing we have put i n front of him. WE have given him fancy feats gourmet, appetizers and Evo. WE have added probiotics just because so many bloggers use it with kitties with tummy problems. We are adding dry kitten food to this. He does have diarrhea, now.
Angel is 4, healthy and positive. The vet keeps telling us she is overweight. She is a short bodied and legged cat and does not look fat at 10 pounds. but you can not feel here bones. The vet is just trying to keep her weight controlled so she will not get fat in old age! She eats well and plays hard.
Kirby is , healthy and negative! The vet also says that he is overweight at 12 pounds. He is tall and long but not as tall as Mac. Again the vet is looking at years to come if he keeps gaining a pound a year! He eats every thing, including half of Angels and Mac’s if they will let him.
WE are joining the Yahoo and Facebook groups for FIP and hunting a local vet for a second opinion. Our vet has been good to us, but it never hurts to get more opinions, we would if it was one of us! . He suggested keeping Kirby away from the other two. Not going to happen. He would claw the walls down if confined. He is the ADHD kitty of the family! Mac and Angel are the laid back two that only tolerate each other from a distance!
I am just not up to posting on the blog right now, but may put this up just as an update.
We will get through this and who knows, Angel may never show the symptoms, Kirby may test positive at some time in the far future and Mac may out live us all! We will let Mac join the family soon, just want to get him gaining weight, if possible!
Thank you for being there for us
Posted by Angel, Kirby and Max at 2:25 PM 15 comments:

I want to thank every one for the well wishes, words of comfort and information. We are still reeling from the news.
Mac is happy and energetic. He is eating Fancy Feast gourmet meals, Appetizers, Fresh cooked chicken in broth. So far he is eating every thing we put in front of him. He is taking an antibiotic and a steroid. WE are trying a probiotic on his food.

Angel and Kirby were tested yesterday. We will know sometime tomorrow if they are affected.


Sorry no pictures today!
Posted by Angel, Kirby and Max at 8:56 AM 11 comments: 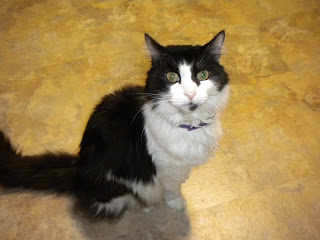 We are reaching out to all our friends for information on FIP.

Mac has lost 2 pounds in the last 6 weeks. He tested positive for FIP. WE know nothing about this and have not had time to process this and read the internet. We do no it is as bad as it gets.

He has to be seperated from Angel and Kirby until they are tested on Wednesday. If they are negative, he will live out his days in solitary. . If they are positive, they can all get back together.

Mac is being encouraged to eat any thing and every thing to gain weight.
Posted by Angel, Kirby and Max at 5:46 PM 51 comments: 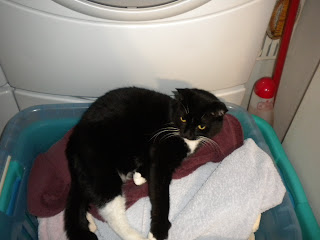 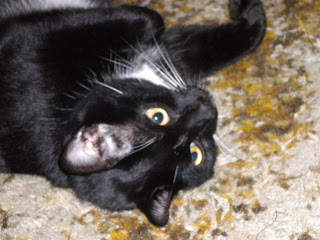 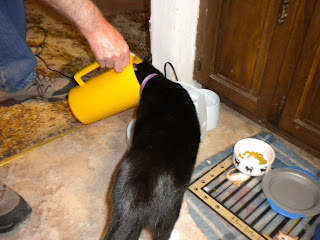 The secret is out! 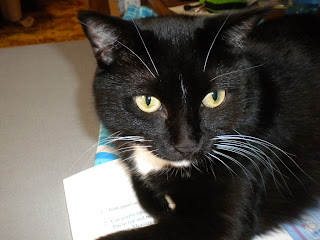 Brothers can be so silly. I knew what they were whispering about before they did!
They think they can keep secrets from me! HA!

We are celebrating the Labor of Love (Sept 2-5) in honor of the wonderful ML, of the SHERWOOD KITTIES, who keeps the CB blog site running......it is truly a labor of love on her part. We love you, ML, and we are so thankful for you. 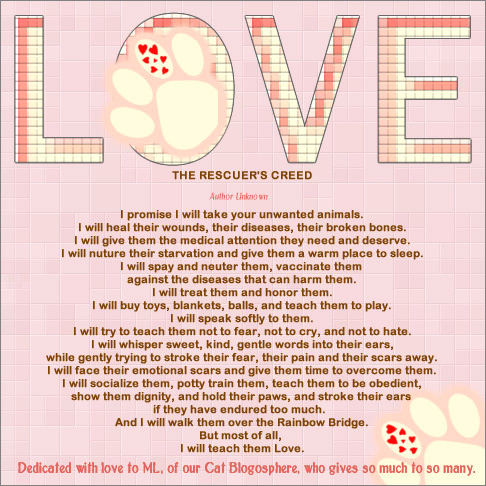 I also want to give thanks to Rose, of ROSE AND THE ROYALS.
A longtime blogger, a good friend of ML's and many others, it was Rose who found this
beautiful poem and who came to me with the idea that we honor ML
this weekend. So, please give a big paws up to Rose!

Let me tell you a secret 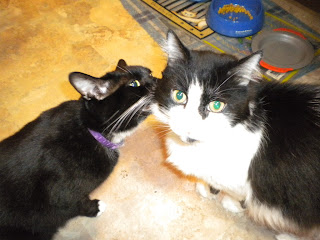 Mac, Let me tell you a secret, but you can not tell Angel!