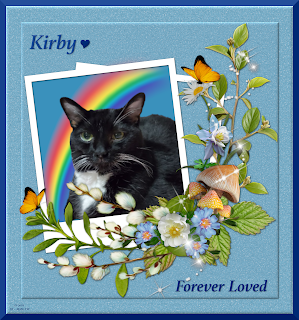 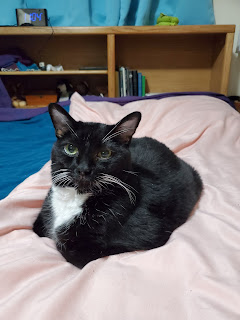 Kirby is 12 and has had diabetes for several years. We boarded him over Thanksgiving at the vet so they could keep up his meds. We became aware on Wednesday that something was not right. Over the next two day it became clear that he was having problems seeing and walking. He went into our tiny bathroom and could not find his way out. He attempted to get on the bed and fell over, laying there trembling. He's not eating much but is drinking a lot. He is not grooming himself. He is at the beginning of kidney failure.
Many of you have been here. You know what is coming . . Three new meds and fluids three times a week. He is blind. We can deal with the meds and fluids and not moving anything in the house. He is able to navigate the house for now. Max and Angel both knew something was wrong. They have smelled him and followed him around . At meal time, Max goes and gets him and basically leads him to the kitchen.
Now it is in our hands. We failed giving fluids to Wizard and Mac. Do we want to attempt it again? Is it fair to him to leave him in the dark? Are we really improving his quality of life? What is best for him, not us? He will come home tonight so we can love on him and say goodbye ,.
my sewing buddy
Posted by Angel, Kirby and Max at 5:52 PM 6 comments: