This week is Petfinder.com's Adopt-A-Less-Adoptable-Pet Week, a week dedicated to spotlighting those pets that are most often overlooked in shelters. It's all about getting people to take a second glance -- and give a second chance -- to those pets whose only crime is being a little older, the "wrong" color, or otherwise "less adoptable" -- but who have just as much love to give.

When we decided to share our home with a new pet we decided on a kitty. We went to the local shelter to see what was available.

THe first Kitty we wanted to meet was an older lady whose human had passed. No one in the family wanted to take her in so they gave her up. She was a large gray tabby but she did not want to meet us. THe attendant could not get her out of her suite.

We looked in the next suite and there was a beautiful Tuxedo kitty. He was a big fellow and estimated to be two years old. He had an eyelid that was turned in and it was rubbing the eye ball. We were told that he would have to have surgery to save the eye.

We took him home, got his boy surgery and his eye fixed. He was the most loving kitty ever. He took naps with Mom and slept every night on the bed.

He was not with us as long as we wanted, but he let us know when the time to go was. Kidney failure is a cruel illness.

This was our Wizard! 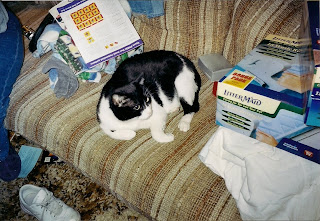 Mom says to ignore the mess!
Posted by Angel, Kirby and Max at 6:17 PM

Bless you for giving Wizard such a loving home and getting his eye fixed. xxxxxxxxxxxxxxx

MOL - you have NO idea how hard it is for my human to shoot around OUR clutter when she is photographing us kitties!

I loved your story about Wizard. It only shows that there really is no such thing as a "less adoptable" pet.

Memories of Eric and Flynn said...

Wizard was handsome, and lucky to get a loving forever home with you.

That Wizard was special in many, many ways!

It was wonderful of you to see past the "problem" and give Wizard a great home! Many people would not have done so.

He is one lucky handsome cat... yes we are always having to crop out he mess...

Wizard was a lucky Cat, and you were even luckier to know him. I feel that way about all my fur babies. Disability, illness, quirks, age, I love 'em all.

Thank you for posting about Wizard. It was great that you gave him his chance to have a forever home.

Wizard was a lucky boy to find you. He was a wonderful boy.

Our mum has given up on trying to crop out our mess. There is too much of it!

But he WAS adorable!! And he did exactly what he was supposed to do: LOVE YOU! xxoo Patty

Me thinks he was hansom mancat! xxoo Bhu

Ah, so this is the famous Wizard of the blog title! That's a wonderful story, and you are wonderful people for giving him a good furever home for the rest of his life.

Aw, that is so sweet. You are wonderful for taking such good care of Wizard and I know that he repayed you in lots of love.

((hugs)) Thanks for helping to trash my house!

Thank you for telling about Wizard and his story. We are glad that he got a good home with you and we are sorry he did not stay as long as you would have liked.

My mom bets your mom that the mess here is bigger and worse than the mess there!

Wizard was ready for just the right human, and so things worked out just as they should. Forever well-loved...

I have known Wizard from your blog and came to know of his story today. It is very nice of you to have cared for him.

we think in the future, it is something that we will be doing as well. We would love to get older pets that have less of a chance to get adopted, because we can't bear to see them go in a shelter. Give them tons of love their last years.

Wizard is so lucky to find you. It's a wonderful story. Thank you for sharing wih us.