Mom has rocks in her head?

Mom here!  You are both wrong.  I had a ginormous kidney stone! I went to the ER on Wednesday around 10 am and they admitted me.  I had a procedure Friday morning to pulverize it so it could pass in fragments.  Was only in pain till they gave me something in the ER and them no more  till I came our of surgery.  I still have a low cramping feeling, but doing great other wise.

Kirby, where are you and what are you bumping? 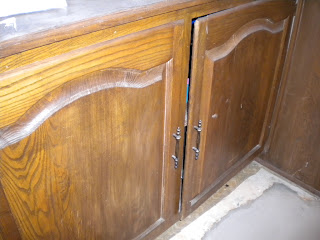 This is the bottom of the cabinet that Angel was setting on. 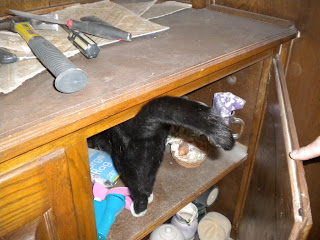 You think you are so smart, don't you!  Opening cabinet doors! 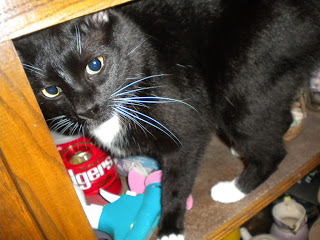 House stuff:  Plumber came Monday but could not fix the pipe.  It was in a concrete beam of the foundation so he will have to reroute the pipe. .  So he planned to comeback on Tuesday.  He lives about 45 miles away and it rained a lot at his house, so he canceled, again.  We had very little rain, again!  He did contact the foundation people and they were to come out on Thursday, while I was in the hospital.  They had equipment failure so had to come back on Friday.   They finished before I was released, so it all worked out.

Now we are again waiting on the plumber and there is more rain in the forecast!
Posted by Angel, Kirby and Max at 5:02 PM

Well I hope your Mum gets feeling better and things get sorted out there! How frustrating!

Purrs for your mom to feel better!

Oh me and Charlie are sending mum lots of purrs and healing hugs!

Aww, Angel you are smart and lovely! Take care
x

Memories of Eric and Flynn said...

We hope your poor mum is feeling much better now and continues to heal well.

Kirby, that's a great hiding spot!! We sure hope your mom is feeling better soon!!

Holy Cats! You guys sure have had some...erm...excitement at your house. Purrs to your rocky Mommy, and paws crossed that the plumbers finishes, soon!

We hope your mom is feeling better really soon!

We are glad your Mum is better! We hopes the plumbing gets fixed soon, too. (Mommy says it is very aggravating.) Purrs. (Great pics)

I am well that your procedure went well and you are feeling better. I hope that you can get your plumbing fixed really soon. And, Angel, you are smart.

Holy cod. Gees, we've heard kidney stones can be one of the most painful things ever. Ugh. Purrs to your mom for a speedy and full recovery!

Hope you feel better. I had a gall stone last year and that was not a fun thing. It looks like you have help under the sink though :)

I am glad you are not stoned any more, I'll bet that sure did hurt. Purrs from all of us!

We hope your Mom is feeling better and better every day!
We think Noah had rocks somewhere in his body ..maybe they were called crystals.
~ The Bunch

I think I've said this before but I'll say it again- I thought only British plumbers were a pain in the a**!!!! I do hope you get it all sorted!!

Angel and Kirby, please take note- be careful in cabinets and cupboards: sometimes they contain dangerous stuff, non cat-friendly bleagh stuff! We wouldn't want you to get sick like Mom! So be careful, please!!!

I hope Mom is feeling better. Kidney stones- never had one but they sound horrific. I guess it's better for we girlies though, huh? Imagine trying to wee one out of a thingy! ;)

Glad your mom no longer has rocks in her kidney. Hope she's all well now.

Oh my, you guys have had a tough week. We are sorry and hope things turn around soon.

I'm sorry to hear that Mama had a kidney stone. I've heard it's one of the most painful things ever, so it's good you were operated on right away. Hope you're feeling much better soon.

Angel's just like Dante. He sees any closed cupboard door as an invitation to open it.

Thank you so much for your kind words about Emma. I am so grateful for so many thoughtful friends.

Thank yoo for coming to my gotcha celebration! Alfie xx

I hope your mom is feeling better!

You are so very clever! I haves never open a cupboard before!

We will be praying for your mom!

Poor mom!! We hopes U is feelin' better!! We hopes ur house will be better, too, fur thanxgiving!! xxoo Bhu

kisses to you mum.

buster can open cabinet doors too.

Teri and her Stylish Cats said...

Teri said there are too many plumbing problems at your house, and she is glad all is fixed up now!