Oh NO Mom got a new flashy box

Mom's old flashy box was tires and needed a rest. It wanted to rest between every picture Mom took. She would have a good pose of us and by the time the flashy box flashes we were out of there so she has lots of pictures where we have left the building!

Dad got her a new one but the user manual was in Spanish. So mom was taking great pictures very fast but they were way too big to use on the blog! She and Dad looked on the internet and found out how to fix it. The picture of Illyana yesterday was take with the new camera. Illyana was in Mom's lap under the edge of the table where the computer is. Mom was holding the camera and trying to get a good picture but they were so close together that Illyana looks like a big cat. She really isn't!

Here is one of me, Angel, with the new camera. Mom says I sit this way a lot. 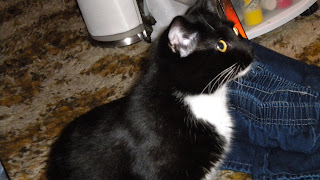 Mom and Dad have spoiled Illyana. They got her a tent because her brother Ivan has one. We all played with it but she slept in it. This is Angel and Illyana playing in it. Can you see Angels paw as she is ready to slap at Illyanna? 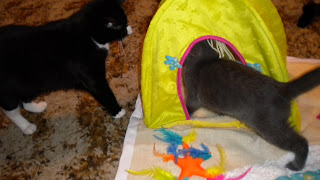 This is one of the 'big' pictures Mom took. It is Kirby ans Illyana playing in the tent. No more explination needed. 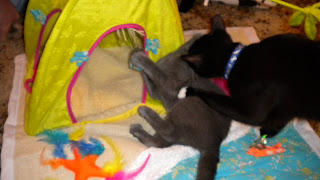 Mom: What is that smell? What have you three done now? I gotta go and see what mischief they are up to!
Posted by Angel, Kirby and Max at 11:20 AM

The pictures are great with the new camera!! That tent is so fun!!!

Oooh, nice pictures! Our camera has a super slow flash so we have lots of exit pictures too haha. Good to see everyone is getting along!

Those are good pictures! It is good that your mom got a new camera. My camera doesn't have a slow flash but it can be tempermental so sometimes I have that same problem - the camera can't keep up with the kitties! I love that tent - it is nice that Illyana gets one since Ivan got one. And boy, you can see that Angel is ready to bop her head in that first picture!

Mom's camera is so slow that we are always blinking from the flash when the shudder closes.. or we run away before it takes the picture! Gratz to Your Mom on the new flashy box... and can't wait to see tons of new pictures of you all getting into trouble

I hope your mom enjoys your new flashy box! Sorry I have not been around....too much going on at my house.
It looks like you guys have been having lots of fun!
--JB

Mom's camera has a slow flash so I am always walking away in most pictures! Those are great photos!

Really cool pictures! You guys are going to have that flashy box in your face a lot!

The tent looks really fun. Now we want one

It can be both fun and mind boggling working out the best way to use a new camera. We hope you are enjoying it:) Angel, we love the photo of you. You are a very beautiful ladycat:)

New flashy boxes are awesome! You always get inspired to take more photos. I hope you have a lot of fun figuring out the manual and finding lots of photogenic poses!

How nice that your mom got a new flashy box...now there will be more and better pictures to see of you all!

There will be no slowing down the paparrazi now! Repeat after me...CHHEEEZZZEE :)

Moms love new cameras! We always resize our pictures so it doesn't make the blog load too slow.

Mom's been a bit whiny lately about wanting a new camera. We think that will mean she'll just take more photos of us.

So furry, furry cute! It looks like all three love that tent. You'll have to get one for your own kitties too!

Oh, how can you blame your human mom for wanting to take lots of pictures of such attractive creatures as you cats?

Great pics. You should be models!